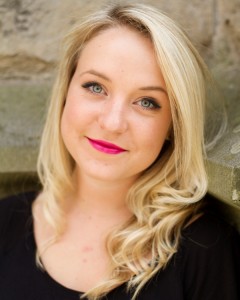 We all dream of having the full package – angelic singer, graceful dancer and sought-after actor… And for some, this is a reality. Vicki Robertson, 21, originally from Ladybank in Fife has just been cast as Sandy in Grease, which will be showing at Glasgow’s King’s Theatre this April. Not only has she got the talent, but she also has the brains and is in her fourth year of studying medicine at Glasgow University. Olivia Newton-John may be a hit in the movie but Vicki is set to be the star of the show. I spoke to her about how she plans to squeeze into those famous skin-tight trousers and the mammoth task of juggling her medicine degree with her passion for the stage.

What made you decide to start singing and acting in the first place?

I think it all spawned from having a background in music from a young age – I started playing piano when I was about 4. Some of my earliest memories are of sitting at a piano playing in local festivals while sitting on stools that didn’t even let my feet touch the ground.

What was your first role in the theatre?

I started performing in a youth company based in Cupar, Fife when I was 12.  The first show I performed in was called Tin Pan Ali, a twist on Ali Baba and the 40 Thieves set in 1920’s New York. I was given a solo verse in the first song in the second act and I loved all 13 seconds of it. I remember feeling empty after the show ended and I cried for about a week over how unfair it was that Michael Jackson had platinum records when he was 10 and I didn’t!

What has been your favourite role and show to date?

I’ve been very lucky in the roles I’ve had a chance to play. I loved Dorothy in The Wizard of Oz as it was my first real lead role and opened so many doors for me. However I think my favourite role was the part of Wendla in a musical called Spring Awakening. I adore the musical adaptation; it’s absolutely dripping in teenage angst. Spring Awakening was the first musical I performed in while studying in St Andrews and was very different to any show I’d ever performed in before.

How did you audition for the part?

I did a lot of research into different companies and singing opportunities before I moved to Glasgow in September. It’s safe to say I knew about 10 times as much about the arts scene here as I did of the course I was about to join. I heard about the Pantheon theatre group through a few friends and signed up for auditions the minute I saw applications were open. Auditions were intense, there were three separate rounds involving singing, dancing and performing sections of the script in front of a panel. I was at the final round of auditions for about seven and a half hours reading various scenes with different potential Dannys – I had to perform the drive-in kiss scene with three different guys who I had met that day – and was even dressed in a black lycra catsuit and heels at one point. That night I managed to accidently delete my email telling me I’d been cast as Sandy so I had to wait for the cast list to appear online to confirm I hadn’t actually dreamed it.

How did you find your first rehearsal?

It was amazing. I love rehearsing about as much as actually performing so I’d been counting down the days to getting started. I love an intense rehearsal where there’s a product at the end and everyone is so focussed. It’s also scary coming in as a newcomer as a lot of the club members have done many previous productions.

What are you most looking forward to about your role as Sandy?

Sandy is a great singing role, the stage musical has even more music in it than the movie and I get a good chunk of it so I’m really looking forward to blasting out a few famous numbers. Hopefully at some point in this process I won’t resent the idea of the skin-tight trousers.

Why did you decide to pursue medicine rather than musical theatre?

I like to think I’m still deciding. I’ve said for ages that I’ll finish my degree and if I’m still toying with the idea I’ll take some time out to train and maybe give it a bash. But getting into stage school is probably harder than getting into medical school so that’s a major factor in itself. I will never give up on medicine completely as it’s a fascinating career with a very stable and secure outlook but at the same time I don’t want to think “what if” for the rest of my life. I firmly believe that if I had given up musical theatre while studying medicine I would have dropped out by now. It sounds a bit cliché but I go nuts if I don’t have a show or a concert to work towards, especially with a course this heavy going. It’s definitely going to get hard when I start on shifts as a junior doctor but I’ll cross that bridge when I come to it.

What advice would you give to other students balancing their degree and their dream?

If you love it, it’s worth making time for. I can guarantee I would miss the buzz a lot more than I’d miss the 5% in my exam. Although don’t be careless, I have a rule that I’m not allowed to rehearse for at least a week before an exam. Also, there is absolutely no rush to make any life decisions this early in the game. A year or so out to do something I really love won’t shoot my future career out the sky at all. I’m just lucky I have so much to look forward to and I’m so grateful for everyone around me for all their support, regardless of where I end up.

Grease will be showing from 1-5 April 2014 at the Kings Theatre, Glasgow. For tickets, head to www.atgtickets.com

Hannah is in the final year of her degree in multimedia journalism.