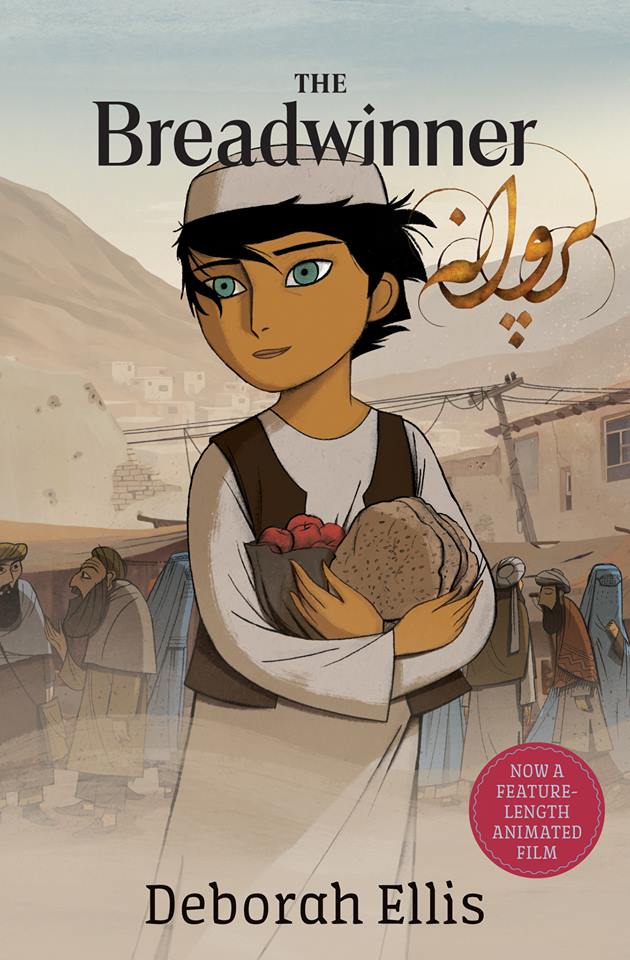 As part of Glasgow Film Festival 2018, we watched The Breadwinner, a 2017 animated film.

Based on Deborah Ellis’s award-winning young adult novel of the same name, The Breadwinner follows the story of Parvana, an 11 year old girl living with her family in Kabul, Afghanistan, under Taliban rule.

Her father struggles to provide for the family by selling their possessions in the marketplace and offering reading and writing services. Soon he is arrested – for having forbidden educational literature – and taken away to prison. Desperate, the rest of Parvana’s family come close to destitution and try to work out what to do: no women are allowed out unaccompanied by a male and the only other living male member of the family is her baby brother Zaki. So Parvana decides that if she isn’t allowed out by herself as a girl, she will go out as disguised a boy to earn money for her family and to try and find her father.

For a film about a child living under a totalitarian regime, it could easily become unbearably depressing – but it isn’t. The Breadwinner is serious, sometimes shocking, and sad, but it’s also defiantly joyful and creative. It’s a testament to retaining humanity and imagination in a dangerous and seemingly hopeless situation. The film is buoyed throughout with Parvana’s storytelling – a simplistic and charming fable about a boy who has to rescue a bag of magical seeds from an evil elephant king – and it’s this theme of imagination and the power of using one’s creative intellect that defines the beating heart of this story. It’s not that Parvana seeks solace in fantasy to the point of not engaging with the harsh reality of her life, it’s that fantasy and stories can keep hope alive, and help people – especially children – to come to terms with that harsh reality.

It’s also an exquisitely beautiful looking movie. It stands out as another great example of the power of animation as a medium to tell even the most serious of stories. However, the striking quality of the art doesn’t distract from the plot and characters, and instead bolsters their power and imbues even the smallest, most intimate moments with beauty. The soundtrack is also worth mentioning. Utilising traditional Afghan instruments and an Afghanistan women’s choir, it provides an enthralling musical background to the story. But despite the beauty of the visuals and soundtrack, this isn’t a sentimental or overly prettified film. This is a stoic, unflinching view of the lengths that people, and particularly women, have to go to to survive oppression and violence. The fantasy world of Parvana’s imagination only magnifies the horror of her everyday existence when she returns to it. While in fantasy, monsters are defeated through cunning and magical artifice, in reality, monsters can be outsmarted but – as indicated by the warplanes constantly passing overhead and the gunfire in the background – the world that created them still remains.

Previous reviews have expressed disappointment with an apparently meandering narrative structure, and the film indeed does suffer from a lack of clearly defined A to B plotting – but it’s also worth pointing out that perhaps the story isn’t meant to be a simple conflict-resolution narrative. After all, the real-life context of the Afghanistan conflict and the Taliban occupation was, and remains, complex and messy and woefully misunderstood as something that could be “fixed” with simple solutions. Perhaps it’s not so unexpected that the stories generated against that background should be equally difficult to resolve with easy answers. Fundamentally, this film is, despite the aforementioned beautiful animation and lovely soundtrack, not an easy watch and nor should it be.

Watch the trailer for The Breadwinner here: