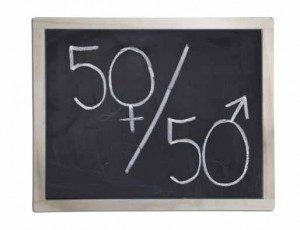 What is it about the F-word that gets everyone in a panic? Perhaps some people have come to view feminism as a fashionable fad, with celebs attaching themselves to feminist hashtags but none of its values.

As a result, feminism landed somewhere between aspiration and shame. Feminism became like Uggs – popular, but not a label you really want to be seen wearing outside the house.

The confusing, ‘man-hating’ tabloid tug of war that we now associate with feminism landed us in very dangerous territory. No one knew what feminism was. No one knew if it was something they wanted, or could be.

Of course, it was up to Hermione Granger to save the day. In September, Emma Watson gave a passionate speech on feminism at the UN to launch the HeForShe campaign (www.heforshe.org), clarifying that feminism is a movement that involves both genders working together to end inequality.

In a speech that went viral, Emma highlighted that by bringing together both men and women in the campaign, we can abolish the “us against them” mentality previously associated with feminism by asking: “How can we affect change in the world when only half of it is invited or feel welcome to participate in the conversation?”

She spoke at length about how gender stereotypes can be as damaging to boys as they are to girls. In short, everyone can benefit from the F-word, and we shouldn’t be afraid to say it.

Emma has succeeded where others have failed; she isn’t using feminism for personal gain. Our generation has grown up with Hermione – her voice matters to young people still forming their opinions on gender roles and advocacy.

Former reluctant feminist Taylor Swift has spoken out too, confessing had she seen her favourite actress explain feminism when she was 12, she would have identified herself as a feminist a lot sooner.

Perhaps what gets lost in the razzle dazzle of Beyoncé’s fantastic feminist romps or Chanel’s recent controversial ‘feminist riot’ finale during Fashion Week is that feminism cannot only be accessed or understood by the privileged few. Publicity stunts, feminist hashtags and empowering pop videos are all very well, but as Emma states, everyone needs to be involved to implement change.