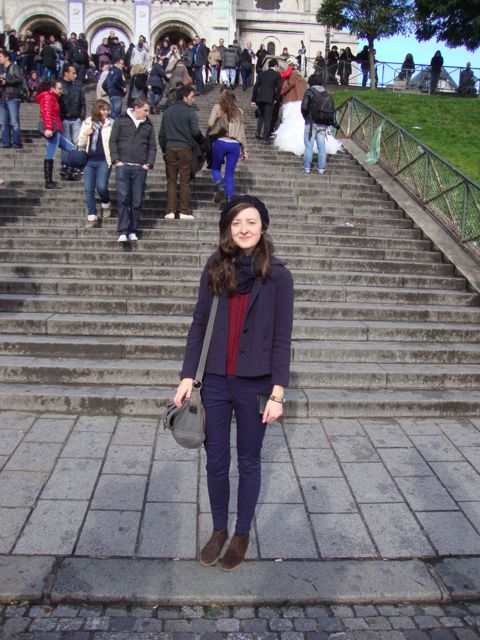 Exploring new cities, chilling on the beach on days off, meeting up with foreign friends on nights out… It’s the year abroad dream: that vision we see whenever someone mentions ‘study abroad’, ‘language assistant’ or ‘exchange.’ But what’s it really like? Well, for some it isn’t all sun, sea and socialising. Source writer Laura Brown, pictured right, remembers the reality of her year abroad placement…

By the time I left school, I knew what I wanted to do at uni. I’d heard so much about the magical year abroad from teachers, family and older friends that my UCAS form read ‘French’ from top to bottom. My year abroad would be the best year of my life. I’d spend my free time sunning myself on the beach, eating macarons or croissants for breakfast and I’d come home fluent and quasi-continental. I clicked ‘complete’ on UCAS: English Literature and French, the equivalent of booking a one-way ticket to the continent.

For all university language students, a study abroad placement is compulsory and takes place between second and third year or third and fourth year, depending on where you study. At Glasgow Uni, I was given the choice between ERASMUS (a university exchange), a work placement (which you have to organise yourself) or a British Council Language Assistantship (teaching school kids for 12 hours a week and being paid for it). Since I wanted to earn some cash, it was a no-brainer.

I applied directly to the British Council, the UK’s international organisation for cultural relations. As an ELA (English Language Assistant) I was offered a location choice: city, town or village. I chose a town — but as we Scots know, a town can range anywhere from a tiny Highland settlement to a sprawling Glaswegian suburb. It’s the same on the continent. I found myself in a small town of 8,000 people on the French coast. ‘Centre ville’ consisted of several streets, cafés, a few pubs and some shops. Trains were irregular and at awkward times. I felt like I’d been sent back a few hundred years.

OK, so the town wasn’t the most glittering of places, but thankfully, the isolation was diluted: two other assistants lived nearby so we shared a small apartment. Our first few weekends were spent exploring the town (which took about an hour) and visiting nearby places on the bus. The British Council also organised an induction day for all the assistants in our region. It was three hours away by train but the travel was worth it. I met dozens of other assistants from all over the world — America, Canada, Ireland, even India — and suddenly my friendship group was much bigger. We were invited to parties at weekends and assistants would stay overnight to visit the nearby tourist attractions. Most of the time though, it was just the three of us in our little Norman town.

The tricks of teaching

When I wasn’t wandering quiet streets or watching Friends re-runs on French TV, I was teaching. Do you remember that French / German / Spanish assistant (delete as appropriate) that occasionally came into your class around exam time, or played random games with small groups of students? That was me. I was the weird foreign girl with pale skin that stood in front of a class of fifteen teenagers. I had never taught before. I had never even been trained. On my first day, the teacher printed off some worksheets for me about Scotland (apparently we all wear kilts, drink whisky and are ginger) and I was expected to know what to do. I was shaking.

Over the next seven months of my placement, I became a semi-professional actress. Teaching was a lot harder than sitting in ERASMUS lectures. How good or bad my day was depended on the students: some were hardworking and polite, others tried to run riot. The key was keeping calm, acting confident and being able to laugh at yourself (especially when the whole room was already doing so).

This symptom can strike no matter what year abroad programme you enrol in. Imagine your daily routine — eating, working, socialising — transplanted into a foreign language. Everything is warped. You struggle paying at the supermarket till, you can’t understand the Big Bang Theory because it’s been dubbed into French, even the houses and roads appear distorted. Essentially, you’re living a ‘normal’ life in a setting that you can’t understand.

Even more challenging is what happens when you come home: reverse culture shock. When I returned to Scotland I felt empty, directionless and alien. After quite a lonely and difficult time away you’d think I’d be ecstatic to return home. Yet I found it very hard to align the new me (who had experienced life in a foreign country, who had learned so much about herself) with the old me (who was very much alive and well in the eyes of all my family and friends). It took me over six months to feel ‘normal’ again, like I belonged in Scotland. It was a tough process to come ‘home’ and find that I didn’t truly fit in. I’d changed, we all do, and it took time to accept that.

My year abroad was never going to meet my idyllic expectations. I hadn’t returned tanned or totally fluent in French, neither had I managed to get myself a guy (my gran had requested that I find a wealthy Frenchman with a chateau so she could retire in comfort). What I did discover, though, was a renewed appreciation for my normal little life in Scotland. Family, friends, boyfriend — I realised how much they do for me and how close we all are. Sometimes it’s the simple things we forget, and sometimes you just need a bit of perspective to see them again.

Laura studies English and French literature at Glasgow Uni. When she’s not reading, she’s either blogging, walking or taking photos - with the obligatory flask of tea for company.