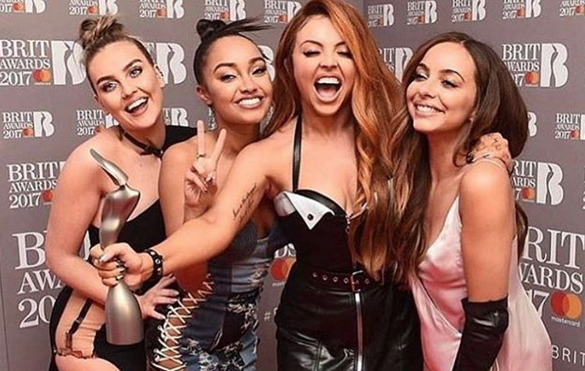 We line up our favourite moments from last night’s show…

Emma Willis might have been a last-minute addition to this year’s BRIT Awards, but we reckon she did a sterling job. Her and Dermot were the absolute DREAM. TEAM. More of them together, please?

The 1975 had everyone confused

The 1975 had a pretty successful evening at tonight’s BRIT Awards, didn’t they?

The band impressively nabbed the gong for British Group, and performed in front of the humongous crowd at London’s O2 Arena. But then it all got a teeny bit odd,  didn’t it?

As they belted out their track, what appeared to be a series of insulting messages popped up on the screen. Were people sending these in? Had the BRITs been hacked? What was going on?!

Wtf someone just hacked the Brit awards and wrote loads of hate about the 1975 😂😂 @BRITAwards pic.twitter.com/DTkJ5mIm1r

Luckily it turned out The 1975 weren’t being targeted by TV-hacking-troll. In fact, they were totally in on it.

Fans of the band explained everything, with one Tweet reading: ‘People thinking the brits was hacked during the 1975, it’s on their music video for the song it was meant to be there.” Phew!

people thinking the brits was hacked during the 1975, it's on their music video for the song it was meant to be there 😂😂#BRITs2017

X Factor judge Nicole Scherzinger turned up to present the award for British Artist Video Of The Year alongside her X Factor boss Simon Cowell. It was great to see the cheeky pair back together. But it was even BETTER to see them reunited with X Factor prodigy Liam Payne. Liam was there to pick up the British Artist Video Of The Year for One Direction’s single History. Predictably, Twitter went mental, with fans going gaga over seeing the amaze-balls trio back on their screens.

ICYMI: || When @NicoleScherzy saw the winners name on Simon's card, she got super excited & wanted to announce it herself!

Yay! We did it!! 🙌🙌
One Direction won #Brits Award for the best Music Video!@SimonCowell and @NicoleScherzy gave it to @LiamPayne !🎉🎊🎉 pic.twitter.com/quP69E6IAB

And last but not least, Little Mix stole the show

Perrie, Leigh-Anne, Jesy and Jade all arrived on the red carpet in four quirky (but completely gorgeous) floor-length designs before taking to the stage to open the award show with a BANG.  The dreamy girl gang kicked off the BRITS with a jaw-dropping performance of Shout Out to My Ex. But the girls weren’t satisfied with ruling the red carpet and the stage – they had to sweep up at the awards too.

I STAN THE MOST TALENTED GIRL GROUP OF THE ENTIRE WORLD #LittleMixBRITs pic.twitter.com/w4cHLbfPON

Following their blonde bombshell performance (they all rocked platinum wigs), the group went on to win their first ever Brit for British Single of the Year. The girls clearly couldn’t believe their luck – gushing to the crowds how they’d never expected the award. “We honestly didn’t know where to go because we didn’t think we’d get it,” admitted Jade. “We were sat chinwagging!”

She cheekily added: “And lastly, cheers to our exes. This is for you lads.” Talk about Girl Power!

What was your fave highlight of the BRITS? Let us know on Twitter!