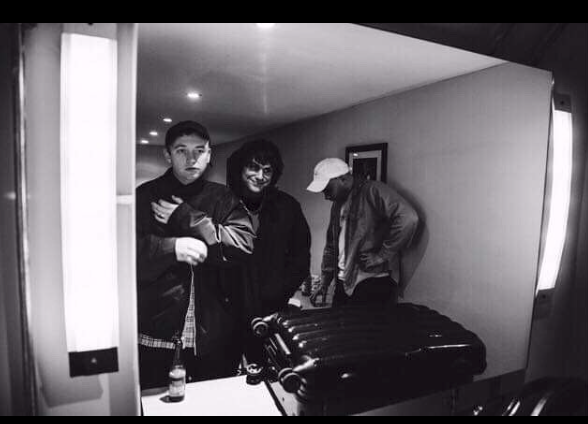 It’s three months to the day until bands will be storming Glasgow Green for TRNSMT 2019. One of those bands includes Sydney rockers DMAs. We caught up with the band ahead of their performance at Edinburgh’s Usher Hall on Tuesday (9 April).

With an ever growing following, the talent that oozes from the Australian trio is evident. Fresh beats, catchy lyrics, and a style that has everyone running for their nearest basketball hat shop: DMA’S are a band unlike any other.

An eclectic mix of indie and pure rock, singer Tommy O’Dell shares why you can’t miss the DMA’S perform on 13 July on the TRNSMT main stage.

Going right back to Australia, how did the three of you come together to start the band?

We played in bands together growing up. Tooky and I went to school with each other and we met Mason from being around the local (bluegrass) music scene.

Where did the idea for calling the band DMA’S come from?

It was an abbreviation of a few different names we had… kind of a nickname.

Cheers Oxford!! Blackburn tonight is Sold Out – get down early for @belakoo x

Before you hit up TRNSMT, you’ll be releasing your MTV Unplugged Live Album. What was it like recording the album?

We rehearsed quite hard for that show as we had to change a lot of the production to suit the MTV unplugged vibe. We’re really happy with how it turned out.

You’ve got an eclectic sound, reminiscent of old-school Oasis, The Verve, and Ian Brown: where do you get inspiration for your music?

My influence is based on Brit pop bands, Tooky’s is County and Folk, while Mason is kind of American noise bands. We all love electronic music, too.

You’re currently on tour, how is this helping you to prepare for festival season?

Yeah, you get into the swing of things and the set starts to really flow after a while.

Next for you is TRNSMT, how are you getting ready to storm the main stage of TRNSMT? Any surprises you can reveal?

No surprises, we’re just going to try and put on a sick rock ’n’ roll show with some chilled out moments.

As artists, how does it feel to be sharing the same stage as Catfish, Richard Ashcroft, Sigrid, and many more amazing acts?

For people who are new to your music, what can they expect?

Sing a long melodies, loud guitars and lots of energy.

Why should people come along to see your set at TRNSMT?

Because we are a sick live band that performs from the heart and try’s to connect with everyone in the crowd.

We are there to share the moment with you and we don’t think that we are better than anyone out there. We are just together, equal in the music, soaking up every bit of atmosphere.

Finally, what one DMA’S song should people listen to before coming to see you perform?

Catch the DMA’S on the main stage of TRNSMT on 13 July, and get your tickets here!