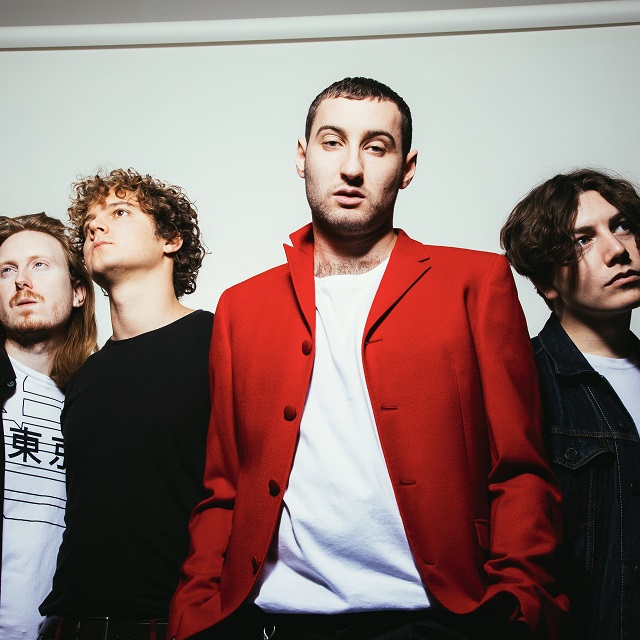 One thing is for sure: Sea Girls are setting sail to exciting places. We caught up with lead singer, Henry Camamile and guitarist, Rory Young, to chat all things TRNSMT and their return to Glasgow in October, to play Tenement Trail.

How are you guys feeling about playing TRNSMT?

Henry: We’re very excited. It’s one of the big festivals, like Reading or Leeds and the energy we got from the Scottish crowds on our last tour was amazing. So, to come and play a big show here is really exciting.

What can the crowd expect from your set?

Rory: Some high kicks, some throwing of the hair.

Henry: A bit of emotion. This is what we do, we just try and play every show like it’s our last and try and enjoy it because it’s what we love doing so we just absolutely get into it and love the songs, so I hope people like that.

You’re playing later on this afternoon, how are you going to spend the rest of the day after your set?

Rory: We want to catch loads of bands. We’d have loved to have caught The Amazons, and we’d been hoping Gerry Cinnamon was playing today, but unfortunately, he’s not. It would have been wild to see him play in Glasgow.

Henry: We love The Wombats, we’ll probably pack up our set and run over to see them. We supported The Kooks the other day which was really good, in Manchester. Lewis Capaldi is a legend, we’d love to see him crack some jokes.

What is it like when you play at festivals, compared with smaller gigs?

Henry: It’s really exciting because you know there will be some people that know our stuff but there will also be people who are seeing us for the first time, so there’s that excitement of wanting to make an impression and I hope they like what we’re doing.

Rory: You hope that you plant a memory in people’s minds and they see where we go next and they’ll have that memory of that festival forever.

Henry: There’s something really good about not just playing to your headline crowds because it can push you out of your comfort zone. You never know what you’re going to get and you’ve just got to love the music. You just get into the songs and know what you’re there for.

What’s it like when you hear your music played on the radio?

Rory: It’s so surreal. We got together in 2015 and it’s only been this last year that we’ve had this sort of attention. It shows all that hard work was worth it.

How did you guys get into music when you were younger?

Henry: I’ve always loved music as long as I can remember. I used to have a little band with my sister when I was two: we wrote some rubbish songs and jumped on the bed. It’s always been kind of like a secret for me, I didn’t want to tell my family. When you’re young, you feel like it’s not something you can do, but I’ve always loved singing and writing music.

Rory: I learned guitar from eight years old. I think I was 15 when I realised that I was on the guitar after school more than I was doing homework, so it was then that I realised this was the thing I wanted to do.

How are you feeling about playing at Tenement Trail in October?

Henry: That’s going to be awesome.

Rory: It’s going to be great, it’s in a great venue.

Henry: Yeah, Saint Luke’s church. I walked past it earlier. I’ve had some romantic strolls past there so it’ll be really cool to play there.

What advice would you give to any fans who see you playing and want to pursue music, too?

Rory: Don’t be precious: you might like this one thing that you’ve written or put together right now, but I promise you, the payoff if you write a hundred songs after that is great.

Rory: Find like-minded people and some luck, too. Luck is very important.

Henry: Don’t look back and just keep doing it as much as you can. You might write a song and it might be rubbish, but the next one might be better. Don’t be scared that you won’t write a good song, just keep going. And follow your nose.

Are you following Source on Twitter and Instagram? Make sure you do to keep up with all of our exclusive TRNSMT interviews.