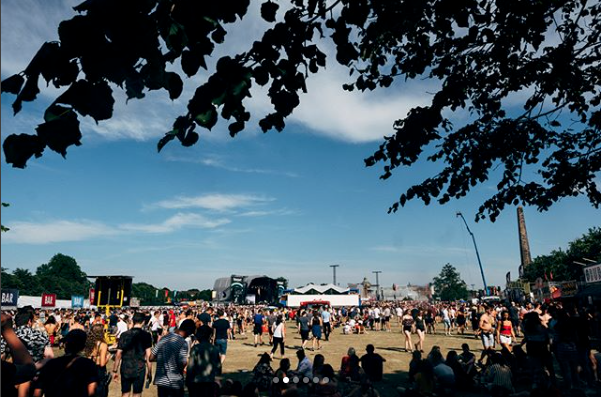 Sunday will also see the music extravaganza take hold with headline slots from The Killers, and performances from locals CHVRCHES and Lewis Capaldi.

Moving up the bill in 2018, Lewis Capaldi is set to perform on the main stage after a stellar show on the King Tuts stage last year. Around TRNSMT there have been posters teasing more live shows from the Tough singer. In March tickets went on sale for Lewis’ biggest headline show to date in the Glasgow Barrowlands – only to sell out half an hour later.

An achievement not many can achieve. For those who missed out it looked like his TRNSMT set was the next best thing. Until now.

That’s right, Lewis Capaldi is set to perform a second night at the Barrowlands on Saturday 10 November, with tickets going on sale Monday 9 July at 9am (eeeekkk!) We bumped into Lewis at TRNSMT who told us the exciting news, but we’ll be having an in-depth chat with him on Sunday – so keep your eyes peeled.

To get everyone excited, Lewis even performed a special rendition of Tough. The boy knows what people want.

After letting slip the desperation for a good Glasgow curry, CHVRCHES are hitting the TRNSMT main stage ahead of Sunday headliners The Killers. Joining the Glasgow electro-pop trio will be rockers Franz Ferdinand partnered with a host of Scottish talent also gracing the King Tuts stage. We can’t believe the talent oozing out of our wee country.

Nina Nesbitt will be headlining the King Tuts stage with up and coming band, LUCIA kicking things off on Sunday – they’re definitely ones to watch out for.

Today’s offering (6 July) is a nod to the rockers out there. Sharleen Spiteri and her Texas crew will be bringing out the classic tunes alongside tracks from their latest album Jump On Board, The Darkness will also be gracing the main stage – we wonder if any Christmas numbers will make the set list – and The Temperance Movement will be rocking out, too.

All before the main event. They will rock you, they are radio gaga, they are the champions: Queen with Adam Lambert are in Glasgow and closing the penultimate night of TRNSMT 2018. There’s going to be glitter, there’s going to be anthems and there’s definitely going to be some dodgy dad dancing.

Here we, here we…