This July, Jane Weaver is heading to Glasgow to play the TRNSMT King Tuts stage.

We caught up with the writer, producer, singer and musician to talk about her latest album, playing in Scotland and being a female in the music industry.

I year ago today #modernkosmology was released on @fire_records ❤️⚡️⚡️mega thanks to everyone involved ..it’s been ace so far, we’ve had a blast! And to everyone who came to see us live and those who bought the album, the support has been amazing! Still loadz more to come this summer and beyond……..it’s all gravy❤️⚡️🤘

You’re playing so many festivals this year and not just in the UK, are you excited to play in places like Norway?

It’s great, we just did a half European tour in February with Belle and Sebastian in places like Holland and Germany. That was great to reach those crowds, then going back to go to these festivals is great, it’s always a different experience. The hospitality is better, there’s nicer food, it’s always different. Obviously just reaching out to new crowds is what you want.

In the UK there’s so many festivals, it’s insane, but it gets a bit samey so its great to venture to other countries. I’m always interested in music outside the UK, its great to discover other artists that we don’t really see in the UK.

What festival are you most looking forward to?

I’ve not done many festivals in Scotland before apart from one on the islands, the landscape is dreamlike so, TRNSMT in Glasgow will be different, it’ll be different doing a city in Scotland. I’m looking forward to that experience.

How does it feel to be playing the King Tuts stage at TRNSMT in Glasgow?

There’s a lot of big names on at TRNSMT like the Arctic Monkeys and The Killers. I’ve never seen The Killers, they’re supposed to be amazing live. We’ll have to see what we can fit in with us performing later on. It’s good at festivals, I get there and try not to see the line-up before and then it’s a surprise, once you’re there you can map it out and run to go see someone for twenty minutes. It’s a thrill just capturing the intimate audiences and atmosphere, I like that about festivals.

You’ve spoken before about Modern Kosmology being inspired by painter Hilma af Klint, how do you start to tackle writing songs with a sort of set inspiration?

It was weird, I just stumbled across her. I was looking at female abstract art and came across it on the internet, she was just a sort of virtually unknown artist, undiscovered until 20 or 30 years ago. She’s one of the first abstract artists. She was female so she didn’t get the accolade she deserves, it was an underground secret society of women who used to paint and channel energies.

I read about her and was like oh my god, her story is fascinating, it was like how she used to channel energy by these mystical means and I was like I need to tap in to this. I didn’t do that, but she was my muse visually and lyrically. It came upon me like I can’t wait to start recording and guided me into that zone, when you write and record it’s a bit like you have to start and write, and then pull it together so that definitely helped. I always encourage people to read about it. That time period, it was the birth of spiritualism.

You have always been very much women for women, do you think you’ve had to work a lot to be successful as a female in the music industry?

I always say a good song is a good song, so whatever you are you should break through, but then again in order to get heard its difficult. There are gender issues, the reason I started doing Bird records was because I was living in Manchester and male peers were going from strength to strength and females weren’t following. It wasn’t because the music was bad, it wasn’t, it was because we weren’t getting that level of attention. I wanted to have it as a board of people to release their music on, my own music too so I wasn’t relying on others, that’s always been my thing.

You’re a writer, singer, musician and producer for your own record label, how do you balance it all?

I’ve actually had Bird on the backburner for a few years, I only do it when I’m not as busy. If you’re seeing artists you have to give them a certain level of attention and I can’t do that when I’m on tour. When I have time, I’ll go back in to doing it, Bird was only a small thing to do limited edition releases, it’s something on hold at the minute.

You’ve worked with such great people like the guys from Elbow and you’ve even been featured on a Coldplay album, who would be your ultimate collaboration?

If I could have someone who isn’t with us it would be David Axelrod, he was a producer that I loved for years. To work with Morricone that would be amazing, someone who is orchestrating soundtracks and to work with that discipline would be amazing, which is different than rock music. When you’re writing its sometimes good to imagine its part of a film or concept, it helps the creative process and it’s like a sound picture. When I’m writing I see things like little scenes and strong visuals to accompany the music, I’ve always written like that.

You’ve been making music since you were 16, do you think it’s easier now to build a fan base and distribute your music?

Definitely but I think that the downside is the demand for people to hear new music is so fast, people get bored quicker. It’s like the demand is instant, you want it you get it. It’s so rapidly consumed, by the time you’ve done one thing it’s like what’s next. I released the new album and have been touring for a year now, I have more festivals and another tour after those, but it’s like trying to write the next record, there’s more outside pressure because of the system.

Everything has a high turnover so then it’s like what’s he next thing, it’s like can’t we just chill out a bit and breathe rather than go straight into the next thing. In the 60s it was British invasion, constantly churning it out, it’s like that but different because its digital, you don’t have to wait to buy you can download or go on YouTube now so it’s instant consumption.

Do you think it’s important to stay true to your style of music even when it isn’t what’s trending?

I love popular music, I love pop production, I love futuristic sounds, R&B, I love modern production, so it’s interesting the way music sounds so much bigger than it used to and the way you can push the boundaries of listening. Part of me is like stick to your guns and part is like listen to other stuff too. The way people listen is changing, you do have to adapt towards technology, you can’t be closed minded towards new ideas.

It’s like when you think about Neil Young, everyone associates him to having just a guitar, but he was into really new tech and anything new that came out, and that’s what I try to do. Really embrace new things, it’s insane isn’t it the amount of music there is now, it’s great if you’re a listener but not great if you’re an artist. 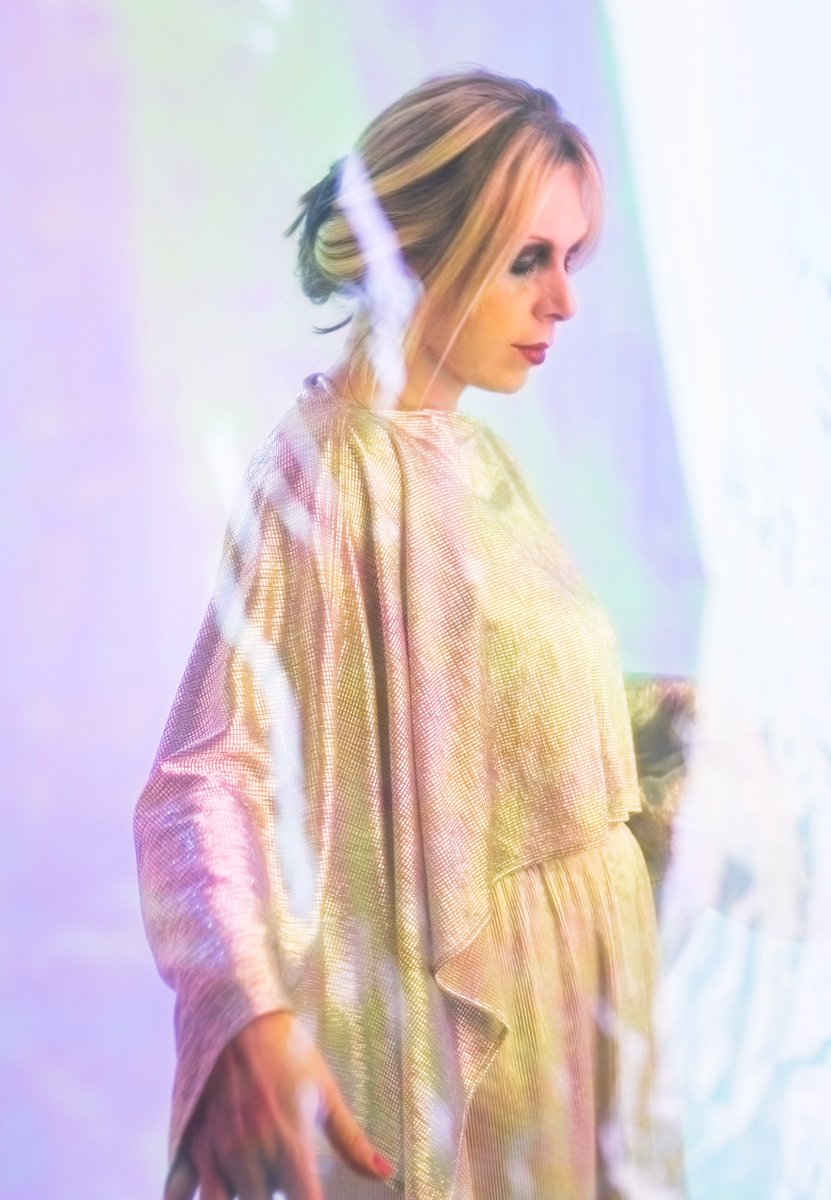 How is it touring when you have kids?

It’s different in the respect that sometimes I can bring them to work with me. I do bring them to some festivals if they’re family friendly, they love it. I love them going to watch music and getting their own tastes. Its definitely hard but I guess if I had a chat with anyone who is pushing the boundaries then it’s so hard to juggle. It’s not like the 70s, the expectations are really high for women to do everything now, you can and why shouldn’t you, but it’s pretty tough as well.

Are they in to making music like their parents?

Yeah, my daughter has heard me playing but she has her own things she’s in to and I’ll say what’s that and she’ll keep it to herself, and it’s like oh right secrets. They love pop music, I guess when they get older they’ll get into sub-cultures or develop different, more unusual tastes

I think as an example to my son; my husband is a DJ always on tour and with his own label. When they were little I kept my hand in but I couldn’t do that much, it’s virtually impossible its important to show them as a woman, and as someone who isn’t 23, you can still be an artist if that’s what you want to do. Just do it and fit it within your life whatever you do.

What advice would you give to young women looking to get in to the music industry?

I think the one thing I messed up on when I got a record deal at 19 is it’s hard to understand the business side and legalities of how it works. Its complex, multi-layered, copyright, royalties are all things that you’re thrown into, but you don’t know it. You might be able to have support but you can put your foot in it and make decisions that can cost you.

The one piece of advice I’d give people who are young is, just arm yourself with as much knowledge as possible, there’s the internet now so it’s easier. To think it’s only now I’m in my 40s I know some things about the industry, I’m not that interested and I prefer to be a creative person, but you can’t be ignorant. Say someone else is dealing with it all, you still have to have some knowledge whether money is involved or not.

Half broken dusty untrusty copicat, Juno has never let me down yet plus you can play Stranger Things music on it to impress your kids ⚡️#wem #roland

What advice would you give to budding songwriters?

If you get a bit bogged down and aren’t getting there, just change and move on to something else. Go try play the drums, go play the bass, go buy something from a charity shop. There’s this elitist collective of things, everything is expensive and untouchable now, all this vintage equipment.

We used to find it in charity shops, things like synths, these will give you unusual sounds. I like having the physical thing, I try to get hold of something different. I don’t work on a computer, I prefer an instrument and messing with it and seeing what ideas I have and that helps. Or, just go away somewhere for a few days, an island or North Wales or Scotland, and just immerse yourself in nature and see what that’ll bring out.

Jane Weaver will be rocking the TRNSMT King Tuts stage on Sunday 8 July at Glasgow Green. Grab your tickets here!