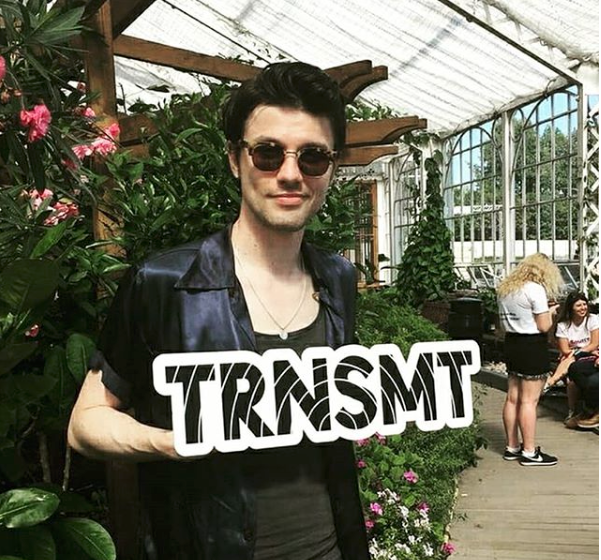 As the sun gleamed across Glasgow Green, punters came far and wide to revel in the festivities of TRNSMT.

In its second year, TRNSMT was bigger and bolder than before boasting a line-up that would even get your nan up dancing begging for more.

Day one (Friday 29 June) kicked off with enormous grandeur – helped by the big ball of fire in the sky. Lorne and Emma went down to the site to get in amongst festival goers, check out new bands, dance with favourites and chat to some famous faces.

One of those famous faces included our very own cover star, James Bay. In the scenic and humid, so very humid, greenhouse of the People’s Palace we caught up quickly with Bay to hand over a copy of the magazine. He was chuffed! “It’s always a pleasure, and for me it’s fun to do stuff like this and get a bit more in depth,” he says before we’re hurried around for our next interview.

Who’s excited for @jamesbaymusic to hit the main stage later today?! We had a quick catch up with him to deliver our latest issue 🎸😎 head to our website to check out the interview 💃🏻☀️@trnsmtfest #trnsmtfest #trnsmt2018 #sourceattrnsmt

Tom Walker is one to look out for, if you haven’t stumbled across him yet. The gravelly tones, infused with honest lyrics and a dash of rock ‘n’ roll make up the Mancunian songwriter – although having a Scottish family means we meet a Scottish toned Tom Walker.

“I’m in Scotland now so it depends on what’s going on. I know it sounds weird but all my family are Scottish so when I’m here I turn into a Scottish person – it’s not fake, I’m not taking the piss,” laughs Tom. It is a proud moment for Tom to be headlining the King Tuts stage – following in the footsteps of Gerry Cinnamon and Lewis Capaldi who have graduated to the main stage – with all his Scottish family watching him. When we chatted previously Tom was eagerly waiting for a roll on square with Irn Bru, we’re happy to report he’s had his fix.

But, what of new music? “We just put the album out for pre-order last Friday, which is cool, so I have to finish it now. It has to happen. I kinda did it because I need a deadline. If I’m left to my own devices I just keep making music and not putting it out,” says Tom.

“My Way is just about enjoying the stuff that’s really hard. This is quite a tough job but it is very satisfying and very rewarding. It is me saying to myself that if you’re going to do it you may as well do it your own way, just go all out and do your absolute best not to f*ck it up. Just keep going,” explains Tom about his latest single, My Way. Gracing the King Tuts stage in a fetching canary yellow jacket, Tom performs the yet to be released single Angels to a roaring response.

Similarly, when closing tune Leave a Light On begins, the crowd go, well, wild. Tom Walker is most certainly a performer made for the stage, he has a quiet confidence when chatting with the crowd – almost like he’s playing in front of his mates – before effortlessly brining the stage and his songs to life. It is Tom Walker like you’ve never heard him before: funny, electric and overall oozing talent.

Joining James Bay (and his tartan troos) on the main stage was The Script before headliners, Stereophonics. It was old school pop mixed in with a splash of rock that made the crowds go wild. Even The Script were having a blast, someone forgot to pass on the memo that they weren’t actually headliners, before they encouraged organisers to get them on the top slot for TRNSMT 2019. We’ll see how makes the first call for that.

As far as opening days go, TRNSMT day one was a success. Did day two succeed? Stay tuned to find out.

Keep up to date with our TRNSMT coverage this coming weekend on our social media. We’ll be chatting with some of the big names hitting the stage on Friday 6 July and Sunday 8 July