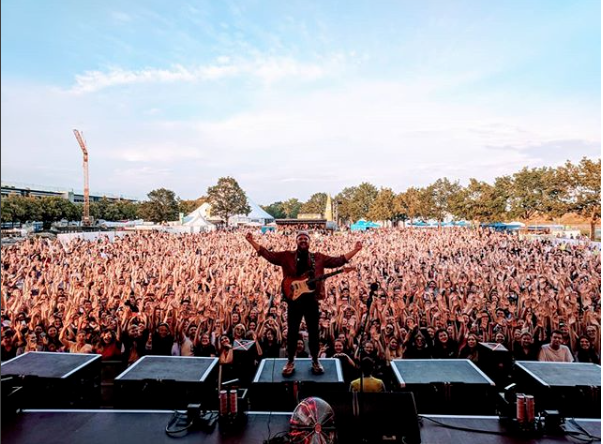 New artists come and go, but Tom Walker is here to stay (thanks to square sausage and Glasgow crowds).

Clocking up nearly 150 shows in one year, working on his debut album, and staying true to his Glasgow and Mancunian roots, the gravelly tones of Tom Walker are going from strength to strength. His infectiously catchy single Leave a Light On saw Tom getting the recognition he deserves. Releasing his latest single My Way, we caught up with Tom to chat TRNSMT, Irn Bru and hitting the road

Festival season is quite literally around the corner. How are you preparing yourself for the shows?

We’ve just come off a UK and European tour and we’ve done some rehearsals since, but nothing can really prepare you for festivals because it’s whatever it is on the day. It is always exciting. But it has been wicked so far. We’re off to a good start.

Last time we spoke you were preparing to perform your sold out King Tuts show. How did that go?

It was amazing! It is my absolute favourite venue. I’ve got my name on the stairs there now, too, which is fantastic. Buzzing! I really love playing there. I get to see all my family and my Gran when I’m in Glasgow.

Now, you’re headlining the King Tuts stage at TRNSMT (Friday 29 June). How does it feel to be making these milestones?

I’m really, really, excited about that. It’s going to be absolutely sick. It’s always such a good gig up in Scotland and the headline slot at TRNSMT: I can’t imagine how good that is going to be. It’s going to be wicked. It’s a good job everyone will have been on the beers for a little while so it will be lively and raucous. I’m really excited for that.

You were born in Scotland, too, does performing here feel like a home coming show?

It’s a funny one. I was born in Glasgow, and I actually speak in a Scottish accent when I’m there and people think I’ve got some kind of split personality. I’m really buzzing. It’s always good to play up there. We’ve got loads of new material too, we’ve been working on stuff for the album and a lot of new songs in the set so I’m buzzing.

You’ve been teasing us with new music and Leave a Light On for so long! When can we expect your debut album?

(Laughs) I would say at the end of the year or start of next year. I’ve written 70 or 80 per cent and we’ve recorded about 60 percent of it. I’ve got so many gigs and events this year that I’m finding it tricky to balance the studio and the gigging ,and getting a day off every once in a while.

Why do you think it is so important to do the festival circuit?

It’s really good, especially for emerging artists. Two years ago, I did ten festivals each weekend, over ten weekends, I was on my own doing it in my car and it opens you up to a whole new audience who might not have stumbled upon your stuff online. People are just wandering in from other tents because a band has finished and they end up seeing your stuff and checking you out, following you, and then you see people at festivals again the next year. It’s just really cool because you never know what you’re going to get – and that’s the great thing about festivals.

It is a busy year this year. Between all the radio events, gigs and festivals we’re doing 150 different performances this year – either me on my own or with the band. It’s really busy but it’s all good. I’m just trying to keep on going. You can’t really prepare for it but I’ve been waiting to do this for a while so I’m absolutely buzzing about it.

For those who have never seen you live what can they expect from your TRNSMT set?

It’s quite rocky I have to say. I’ve got a wicked band with me: we’ve got keys, bass and drums. It is a very lively version of the songs that are already out. We really go to town. I’ve got some absolutely amazing players and I feel like we’re getting really, really tight together as a band. A lot of sing along moments and a couple of guitar solos; it is a lot bigger.

Geneva, what can I say? Never had 8000 people sing back to me before and that was amazing. Cheers to everyone who came down and to @onefmofficiel for having me! 🤘🔥✨

Has your time in Glasgow and Manchester influenced your song writing and style in any way? Both cities have got a high calibre of music.

Living in both cities has definitely had that influence, but the main influence for me was always my dad. He just absolutely adores music and he listens to stuff from all over the world. He introduced me to so many bands: Paolo Nutini; The View; AC/DC; The Prodigy; everything you think of he’s got the CD’s. Me, my sister, dad and mum have been sharing music all through our family. My dad is more in tune than me. I come home and he’s showing me what’s come out – not the other way about, which is mad. It’s a full-time hobby for him, he just adores music.

That’s amazing! Who would you say is your favourite?

Favourite of all time would have to be AC/DC. I got to see them when I was nine years old and I would say it is what got me interested in playing the drums, guitar and song writing. If I hadn’t been taken to so many gigs I probably wouldn’t have done this because it’s not something parents usually push their kids to do. Dad saw that I really enjoyed it and I had a natural talent for and he really pushed me to do something I love.

What have you got planned for yourself the rest of the year?

Just lots of gigs and working hard. I won’t be going on any holidays that’s for sure.

TRNSMT is a week away now! You’re going to be back up in Glasgow, what’s the first thing you’re going to do when you get back up here?

Normally after a gig up there, the next morning I’ll try and go round to my Gran’s house for a roll on square sausage because you can’t get them in England. I don’t really get it because they’re so nice. Scottish rolls are just a hundred times better, the burnt ones that are chewy – they’re so good.

Yeah, it’s the only Scottish thing I know. I absolutely love going round my Gran’s house as well, she always makes me a nice piece and square sausage. She always buys diet Irn Bru, which is not ideal, but she’s only doing her best (laughs).

There are still tickets available for TRNSMT on Friday 29 June. Don’t miss out, grab yours here!