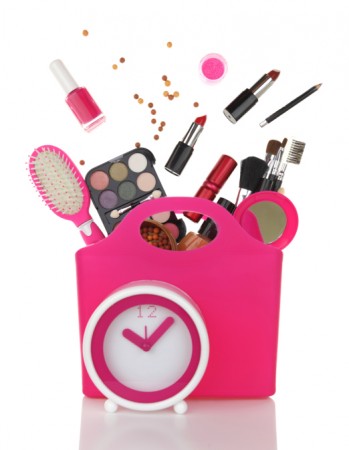 It’s so easy to throw on a bit of lippy, slap on some foundation and Cara-fy your brows before you head out for the evening, without giving a second thought about the contents of your makeup bag. In getting ready to hit the town, do we ever consider what our favourite cosmetics are made from?

We’ve done a bit of research, so prepare yourself for some shocking revelations that might make you reconsider the next mascara that you buy…

Found some bargain cosmetics online? Perhaps all is not as it seems. According to a police report released back in May, £3.5million worth of knock-off cosmetics have been seized from more than 5,000 websites in the last 18 months. Counterfeit versions of big cosmetic brands including MAC and Benefit sold online have been found to contain 200 times the recommended safe levels of metal in them. Paint stripper, rat poo and nail varnish remover have also been found in mascara and eyeliner. Gross!

Lippy made from insects

Our hearts go out to the innocent cochineal beetles that are used by some cosmetic companies to create the red dye in lipstick. The female cochineals, who live in Central and South America, eat red cactus berries, so when they’re crushed, a very powerful red dye is produced. And it’s not only lipstick that these beetles are used for – some eye shadows also use them.

Fish scales in your nail polish

Nail polish contains guanine, a crystalline material that produces a shimmering colouring ingredient. It is made from ground-up fish scales and is not just found in nail polish but also hair conditioners and skincare products. Think about that the next time you head off for a mani.

A common ingredient in many products including eye makeup, foundation and lipstick, tallow is created from animal carcasses. By boiling the carcass (yuck), a fatty by-product is developed, which is frequently the main part of many cosmetic products. Cue vegetarians binning their blusher.

You’ll probably find yourself stepping over loads of these slimy creatures after heavy rain, but did you know that the ooze produced by snails is found in many moisturisers? It might feel sticky and unpleasant, but snail trail contains glycolic acid that protects its own skin from cuts, bacteria and harmful UV rays. Scientists have cottoned onto this, discovering that it is a great source for proteins that get rid of dead cells and regenerate skin. Clever and disgusting in equal measure!