Seventy years after the liberation of Auschwitz and following the Parisian terror attacks, Eilidh Stewart questions just how far we’ve come in terms of tolerance, understanding and knowledge of different regions, cultures, races and beyond… 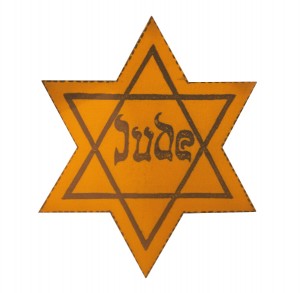 A yellow star, like those worn by Jewish people during WWII in Germany and wider Europe, to make them easily identifiable

I read an article in Grazia magazine last week which was titled “As a Jewish Woman, I’m Afraid to Stay in the UK”.

I couldn’t believe what I had read. It seemed unthinkable to me that the UK could be hostile towards the Jewish community. The more I read, the more disturbed I became. The writer spoke of supermarkets not stocking kosher products and being harassed with the hashtag “#JewsKillGazaBabies”. The experiences of 28-year-old Eve Barlow shook me, especially as I discovered that she has since moved to Los Angeles and feels a lot safer there than with her parents in Glasgow. I realised that something has to be done. Now.

The attacks carried out in Paris almost a month ago shocked the world. The siege held in a kosher supermarket was disturbing, particularly since four hostages were killed, simply because they were Jewish. It was a horrifying experience for Paris, and France as a whole – and it’s sent shockwaves around the world. The consequences of this have meant greater police presence in Jewish communities here in the UK, to try and keep them safe.

The concerns that Barlow expresses in her article come at a poignant point in history. On the 27 January 2015, it was 70 years since the liberation of Auschwitz – one of the concentration camps that was used by the Nazis to methodically murder millions of Jewish people before and during World War II. In the years since, we have always been told that we should never forget what happened during the Holocaust, in the hope that it will never be repeated. However, a CCTV camera in Newham captured a hooded figure defacing a Holocaust Memorial event poster, by spraying “Liars” and “Killers” in big letters. This kind of behaviour is worrying and it cannot continue.

Theresa May, the Home Secretary, has since spoken out about the rise of anti-Semitism in the UK, saying that we all have to “redouble our efforts to wipe out anti-Semitism” and that she “never thought she would see the day when members of the Jewish community in the United Kingdom would say they were fearful of remaining here in the United Kingdom”. But is that enough?

In the commemorative service held at the main gates of Auschwitz on 27 January, Roman Kent, who was 12 when he was brought into the camp, gave an emotional speech. One sentence stood out to me as I watched a video of the event. He said:

“We survivors do not want our past to be our children’s future.”

With many Jewish people living in fear in a country where they should feel safe, more needs to be done to make this happen.