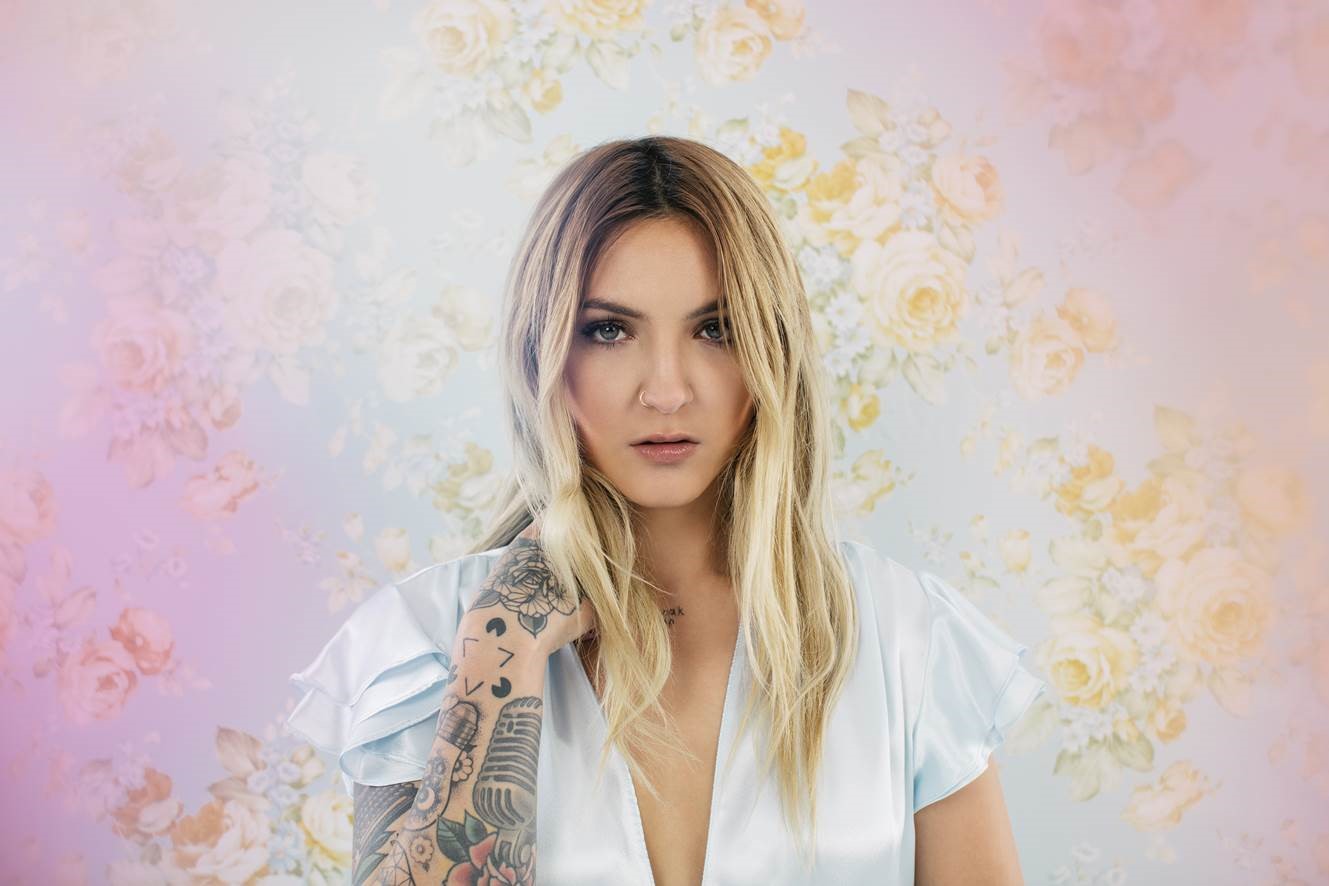 Breathy vocals, slow beats, raw lyrics with simple chord changes… Issues was one of the major anthems of 2017 that struck a chord with its honesty. Singer songwriter Julia Michaels shot to fame after it hit the airwaves and we found out she was the secret genius behind the last few years’ catchiest songs. We caught up with our cover star before her Glasgow gig to talk Justin Bieber, Selena Gomez, the inspiration behind Issues and how she deals with social anxiety.

Julia is only 23-year-old, but her writing CV is full of hits. She’s been behind a lot of the songs you’ve been jamming to in the last few years – from Gwen Stefani’s I Used to Love You to Ed Sheeran’s Dive, and even Linkin Park’s Heavy (!) But it’s the songs she penned for Selena Gomez and Justin Bieber, arguably the biggest singers in the world right now, that really brought her into limelight and launched her own career.

She even co-wrote Justin Bieber’s Sorry – the breathy but endlessly played song that gets stuck in your head for days on end, and one of the biggest ever hits for the Biebs. That’s when it all kicked off for her.

The day that Sorry went straight to number one (where it stayed for a long time), Julia had a big fight with her then-boyfriend who was less than pleased at her amazing success. In less than an hour, she had written Issues about how she felt.

Unlike with other songs she had written, she couldn’t give it to any of the singers she worked with. It was too personal.

“It was really hard to sing in the beginning,” she says, and you can hear her pain in the single, the raw lyrics about feeling jealous and depressed: in short, having issues. “I’ve never been good at being a stereotype,” she says. “I’ve never been able to control my emotions, if I’m upset and then I’m upset. After a while, you get desensitised to [singing] it, until you had a vulnerable day and it brings things to the surface. A lot of my inspiration comes from heartbreak.”

Even though Julia has written several smash singles, including Selena Gomez’s Hands to Myself, she can’t tell when she’s written a hit. “I can tell when something feels special,” she admits. “But there’s no perfect algorithm or formula to writing a hit, but I know when a great song is a great song. I can’t ever call a hit.”

On Selena Gomez and Justin Bieber, who has a troubled reputation, she is overwhelmingly positive. “It’s awesome, I’m really lucky to work with people so super talented and easy to work with.” She even took part in Selena Gomez’s writing retreat in Mexico, where the singer congregates with the top songwriters and all work as a group to write some hit singles for upcoming albums. “We hung out during the day, having a great time and wrote at night. I think she used three of the eight songs we did come from camp.”

But it was a few years into her song writing career before she decided to go solo. “I just wasn’t ready, it took writing for other people to make me more confident,” she says. And a song that was truly hers.

Julia didn’t have any formal musical education, but credits being mentored by the people she has worked with, as well as an early interest in playing the piano – she even has a tattoo of a piano on her arm. “I started playing piano by ear, I was mentored by a songwriter by other famous songwriters: that was my training.” 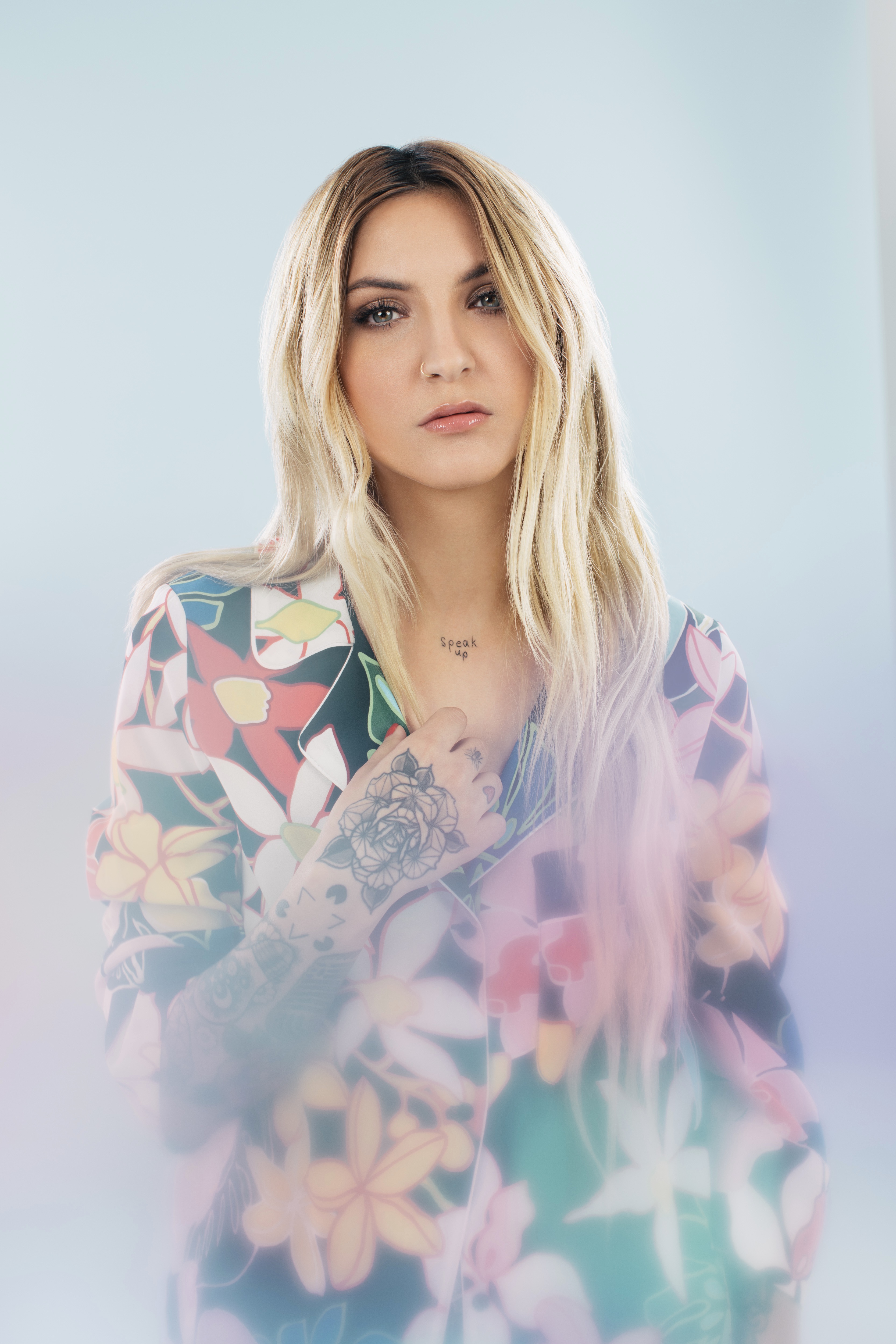 Julia Michaels is seriously inked up. “I have a lot of tattoos,” she says, gleefully. She has at least 14 on show – a few roses, the piano on her arm, treble clef on her ring finger, a faceless woman on her bicep and a few phrases peppered all over her body. “I have my whole right arm done, and I’m going to start on my left pretty soon,” she says. “All my tattoos deal with connections, intimacy, perception: things I deal with and want to learn more about.”

One of the most striking tattoos she has is the phrase “speak up” at the base of her throat. An unusual tattoo to have for a singer, but she also has the phrase “I am ___”. Maybe she hasn’t decided exactly what she is yet – the last year has been a transitional year for her as she let go of her behind-the-scenes persona and stepped into the limelight.

She also has “I love you” tattooed on her palm as a reminder to herself. “Sometimes I forget,” she says. “I have a lot of reminders,” she explains.

Julia Michael’s second live performance was at the Summer Olympics in Rio 2016 in a skin tight, glittery green bodysuit, so you might be surprised to learn that she is shy and deals with social anxiety, just like any other person. It’s something she talks about a lot. “It’s something everyone goes through, but nobody ever wants to admit it because it’s seen a weakness,” she says. “The more you talk about it, it becomes a strength. When you admit it, you take the power back and you have power over it.”

Her way to cope with social anxiety and performing in front of crowds is to talk herself through it. “I rationalise with myself, and think why am I panicking, it could be because of this, ok cool, now I know what it is is.”

She’s incredibly honest on social media, using it to connect with her fans and be real. Although she took the media training offered, it wasn’t for her. “I am who I am, and I don’t want to sell people to lie,” she says. “I want people to know me when they meet me.”

Julia Michaels is supporting Niall Horan at Glasgow’s SEC Armadillo, 18 & 19 March 2018. Check out www.sec.co.uk for tickets and more information. Keep up to date with Julia, on her Twitter.