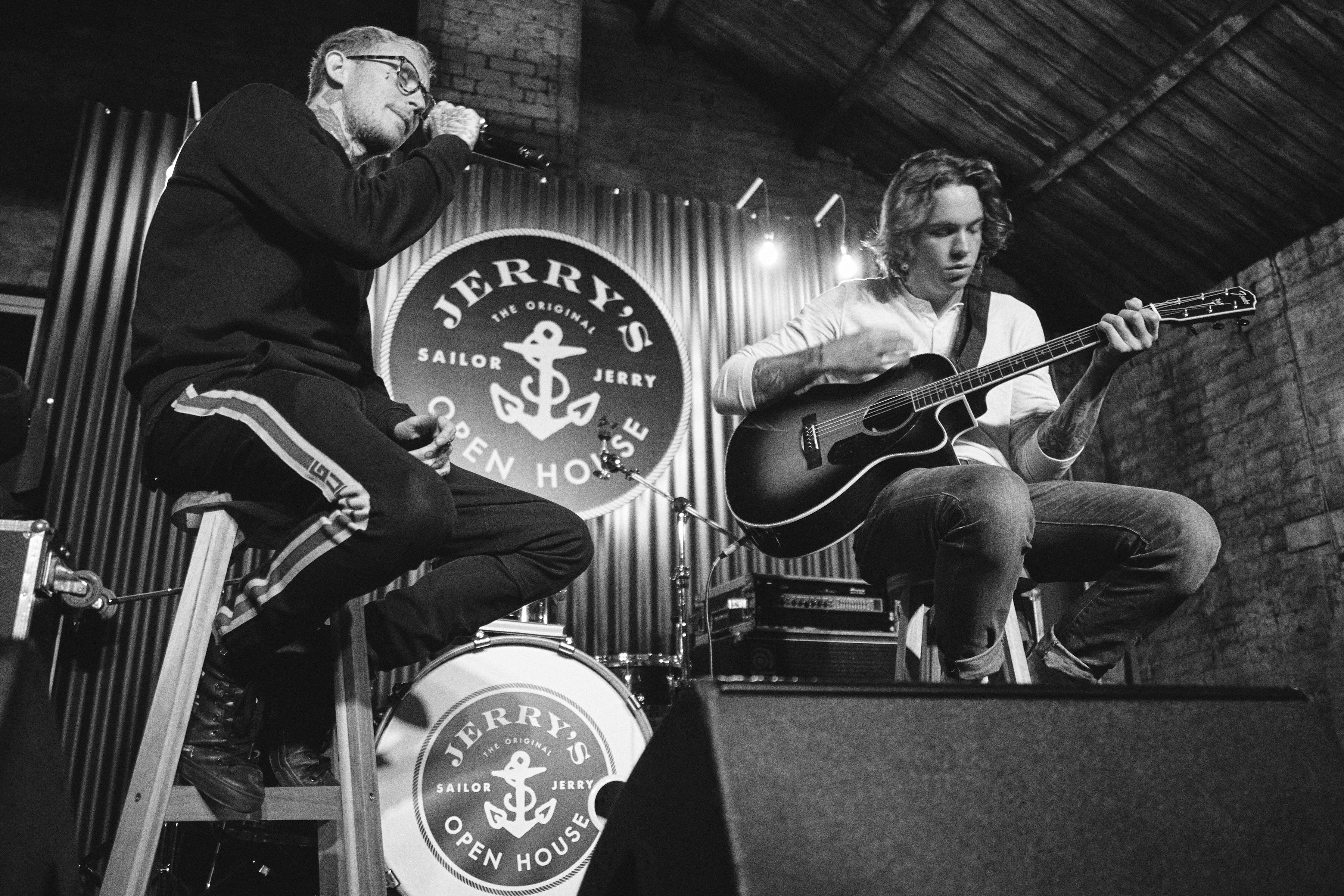 On magazine covers, on stage or simply walking into a room: Frank Carter steals the show. From Gallows, to Pure Love, and now Frank Carter and The Rattlesnakes, Frank appears as the stone cold, tattooed face of punk. In reality, he is a humble, genuine, and forthcoming man who oozes passion for his music, his art, and his tattoos.

We chat to a relaxed Frank ahead of his An Audience With… performance. As part of Jerry’s Open House – a month long pop-up organised by Sailor Jerry – Frank stepped away from the classic riotous show for an intimate, stripped back acoustic set.

Storming onto the music scene back in the early 2000’s, the world was introduced to Gallows, a hard-core punk band that had a cult following. Orchestra of Wolves, released in 2006, was a debut album like no other. Raw, powerful and emotive, it rocketed Gallows, and Frank Carter, to the mainstream – success was imminent.

“I don’t know what happened: I think we just managed to catch the zeitgeist of a lot of young kids. A few things fell into place, we got a massive record deal and all of a sudden, we’re touring the world. Now, I’m just trying to deal with all of the damage – the psychological damage that comes along with that. It was fucking hectic,” recalls Frank.

The partnership with Gallows was not meant to be, with Frank leaving the band two years after the release of their 2009 album, Grey Britain. A politically charged album highlighting the issues happening across the country, Grey Britain is certainly a momentous release. But, what influences Frank as a songwriter?

“I definitely go with how I’m feeling at the time. It dictates less the music I write and it dictates more the space I’m occupying in the world. I couldn’t be in Gallows anymore because of how I felt. I needed our music to change because I just wasn’t feeling it, I wanted it to be smarter. I wanted the violence to be more insidious almost, rather than just being explosive,” he explains. “If you scream at people constantly, very quickly they become deaf to it and they can’t actually hear what you’re saying. I wanted people to really hear what I was saying.”

Leaving Gallows, there was a change in pace for Frank as he started Pure Love. From hard-core, energetic punk to mellow, rock, the journey to acceptance wasn’t as smooth as Frank anticipated. “I wanted to prove something to myself because everything felt so easy in Gallows. I felt like I needed a challenge and I felt like I needed to feel a value of my own. And, it turns out I didn’t – in the very beginning people wanted me for what they knew but through patience, and passion, and dedication to my art, we built a really strong following with Pure Love. Still now, I get people telling me how important that record is to them which is really beautiful and a really nice thing.”

It is now Frank has found sincere success with a band he feels truly content with. Frank Carter and The Rattlesnakes encompasses music and lyrics that Frank is truly satisfied with, alongside an album that he and the band are proud of. The band’s second album, Modern Ruin (2017) is arguably the defining release of Frank Carter’s career and received rave reviews from the music gurus in the know.

Riding on the wave of success, Frank Carter and The Rattlesnakes hit the road playing sold out shows and reaching the dedicated fans that have followed Frank throughout his career. Touring, interviews, meeting fans, it can take its toll on anyone and ultimately, he burned out.

October of last year saw Frank release a statement that the band would be cancelling the US leg of their tour due to mental health issues. To be so honest and open was refreshing, especially when discussing anxiety and personal demons. Frank is not only a punk rock juggernaut and he makes discussing poor mental health in men normal. Prioritising his mental health means that fans should not expect a third album any time soon.

“I’m not ready for an album yet, I have been writing, but it’s nothing that I can really understand. I’m in a weird place in my life at the moment,” says Frank reflectively. “I’m getting divorced and going through a lot of changes in my personal life and honestly, I just need some time to process that because if I write anything now I don’t even know where I’m at. I’ve got to let the dust settle on everything before I can get in the zone.”

Personal troubles aside, Frank uses his art as an alternative medium to music for expressing his thoughts and feelings. Many may not realise that pre-Gallows Frank Carter was a successful tattoo artist in his own right; to this day he will take appointments on and off the road.

“Art is a bit different because I can really hide everything there. With music, it’s got to be a bit more direct, but with art I can explore things that I am not able to in music. It would be considered way left field if I started writing country songs, or pop songs,” he laughs. “People would be like, ‘what the fuck?’ But, I can make pop art or water colour paintings. There is always just an undercurrent of me in whatever I do, I put my heart and soul into all the art I make whether it is music, photography, or painting, or tattooing. I always want to leave a bit of me behind.” 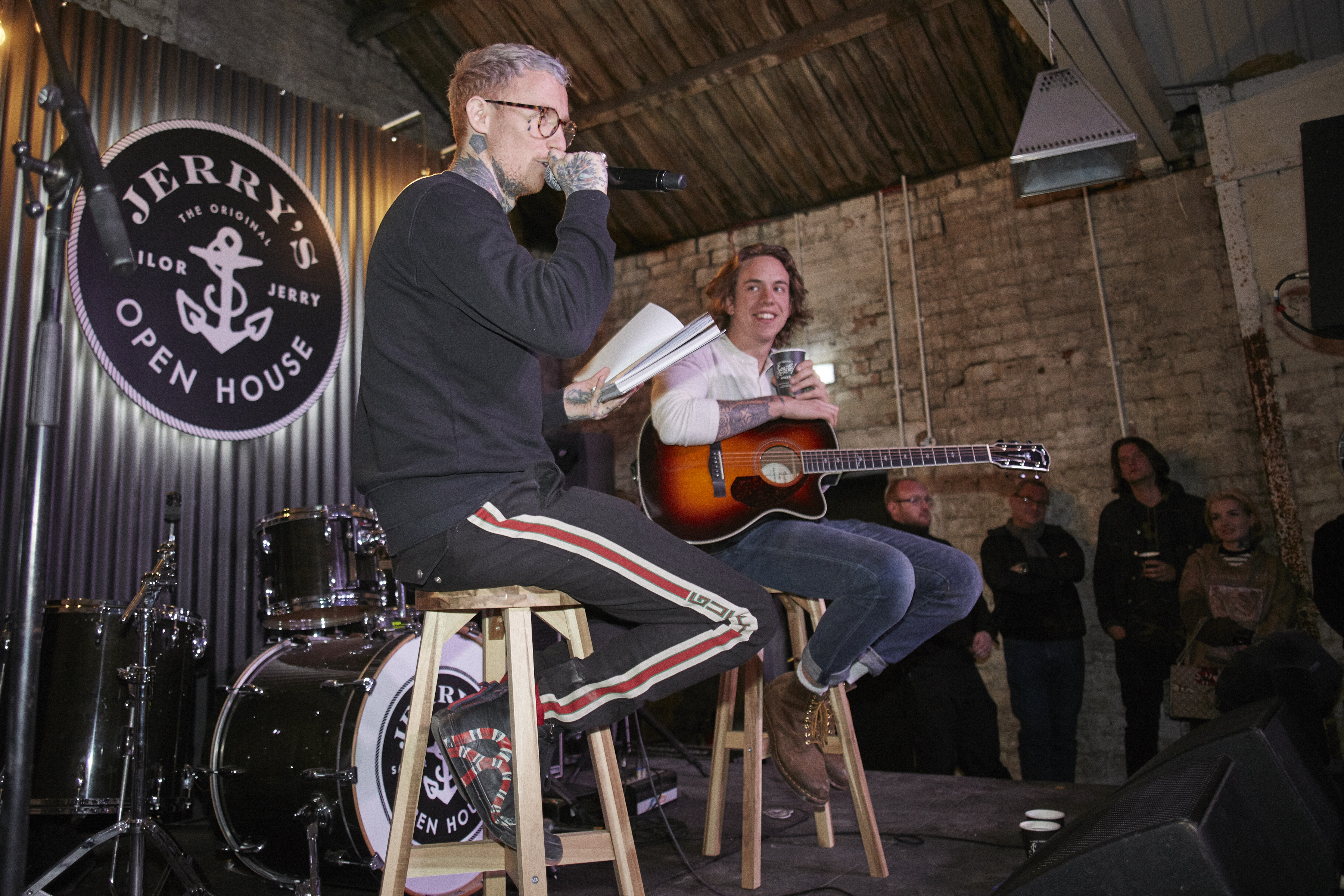 Preparing for an intimate acoustic set with bandmate and best friend, Dean Richardson as part of Jerry’s Open House has, ironically, seen Frank come full circle in terms of art and music. Just like Frank, some may not realise that Sailor Jerry is more than just smooth as hell spiced rum and eye-catching street wear – Sailor Jerry was the mastermind behind Americana traditional tattooing.

Norman ‘Sailor Jerry’ Collins started a revolution in the tattooing world combining influences from the navy, Asian and Hawaiian artwork to create his own style of creative representation. It is fitting that Frank Carter performed at Jerry’s Open House for his connection, and admiration, to Sailor Jerry.

He recalls: “It’s really funny because I have been tattooing for over a decade, and when I started tattooing the only person I really looked up to was Sailor Jerry. Then I was on tour one year and I randomly someone just mentioned there was a tattoo artist on the tour that I should meet. I met him and his name was Keith Underwood. It just happens that Keith Underwood was the apprentice of Mike Malone, who just happened to be an apprentice of Sailor Jerry. Keith was in a weird place in his life and we ended up becoming really good friends – his wife is like my second mum.”

Frank and Keith ended up spending time together running a tattoo studio in Austin before the singer embarked on a life with Frank Carter and The Rattlesnakes.

From tattooing, to Gallows, to Pure Love, to Frank Carter and The Rattlesnakes, mental health struggles, playing at Glastonbury, to selling out a headline show at London’s Brixton Academy, and, now, performing a sold-out show at Jerry’s Open House – Frank Carter has experienced an eventful, if at times turbulent, life but it is one he is proud to have lived.

Your guide to starting university life