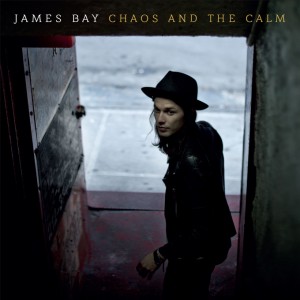 With a popular radio hit single ‘Hold Back The River’, winning the BRIT Awards Critics’ Choice Award and now releasing his first album Chaos And The Calm, it’s clear that 2015 is the year that James Bay dominates the music world and gets the recognition he deserves.

James’ passion is clear throughout the album, as he shares his experiences of making it in the entertainment business, coping with his new fame, leaving his loved ones and his own self discovery.

The album starts off with an upbeat telling of James’ desire to leave his everyday life behind and share his music with the world in ‘Craving’ and is again revisited later in the album in ‘Get Out While You Can’. Just by reading these song titles it is obvious how badly James wants to perform and make music his life.

A fast-paced, upbeat tempo takes over the album with song ‘If You Ever Want To Be In Love’, a feel-good song stepping outside James’ go-to genres. This theme carries on to the inspiring ‘Best Fake Smile’ as he sings about being yourself and always showing your true colours.

Having recorded the album in Nashville with Kings of Leon producer, Jacquire King, obvious influences of folk, rock and blues carry through the album. For some, this may be viewed negatively as many songs on the album are similar; however there are tracks that show James experimenting with different sounds. Hit song ‘Hold Back The River’ and album favourite ‘We Were On Fire’ both involve hints at gospel tones and show that James is not tied down to one specific genre.

A gentler, tender side of James is shown through the warm acoustics and humbling sounds of songs; ‘Let It Go’, ‘Move Together’ ‘Need The Sun To Break’ and the compelling standout track, ‘Scars’. These songs are well balanced in the album with heavier songs like ‘Collide’ which is a pounding mix of frustration, passion and guitar riffs.

Chaos And The Calm proves that James Bay is here to stay and make his mark in the music world. And with James being so successful in his career already, it is no wonder this is a highly anticipated album and is expected to rocket in the charts.